ERIKA3 on the Jailhouse hypervisor

Jailhouse is a type-1 hypervisor developed by Siemens and released as Open-Source software.

The ERIKA3 RTOS currently supports Jailhouse on the following platforms:

To build ERIKA3 for Jailhouse, you need to export the following environment variables:

Additionally, in case of cross-compilation, you also need to put the cross-compiler in the PATH and set the JAILHOUSE_AARCH64_GCCPREFIX environment variable equal to the cross-compiler prefix (e.g., aarch64-linux-gnu-).
Note that RT-Druid allows to set these variables also from within Eclipse. Just press the right mouse button on the Eclipse project and select Properties as shown in the following figure. 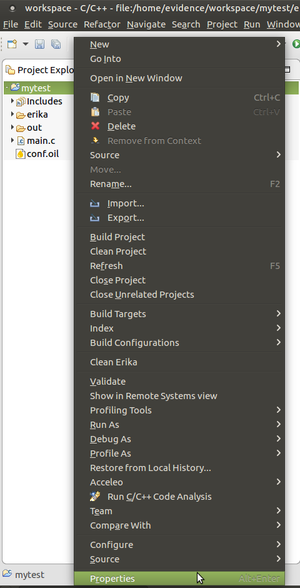 Then, select Generator properties, enable project specific settings (as shown in the next figure), and set the desired values. 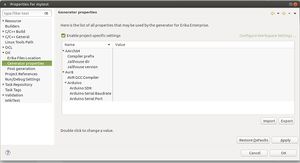 The build process (started by the make command within the generated out directory) will link the ERIKA3 object file to the Jailhouse inmate library, and will create a .bin file.

Once Jailhouse has been started, you can:

Please, refer to the platform-specific pages for detailed building instructions.

Most toolchains available in Ubuntu's repositories (e.g. gcc-aarch64-linux-gnu) are suitable for cross-compiling all the various components: the Linux kernel, Jailhouse's firmware, Jailhouse's kernel driver, the inmate library and the inmate containing ERIKA. However, they usually rely on libc libraries meant to be used on top of the Linux OS. This means that, if the application on ERIKA needs to use the services provided by the libc (e.g. memcpy()), then the inmate library and ERIKA need to be compiled using a bare-metal toolchain different than the one used for building the other components of the Jailhouse hypervisor.

Unfortunately, Jailhouse does not (yet) allow to select different toolchains for compiling the inmate library and the rest of the hypervisor.

To compile only the Jailhouse's inmate library using a different toolchain than the one used for building the rest of the hypervisor, edit Jailhouse's inmates/Makefile file and set the CC and LD environment variables to the right compiler.

Additionally, to link the ERIKA application agains the libc library, you will need to set the following variables in the OIL file: